Gear Review by Germán A. Salazar, Contributing Editor
Reloading at the range with an arbor press and Wilson dies is my preferred method of load development. I’ve had a chance to test and evaluate the Arbor Press from 21st Century Shooting. I have to say I’m very favorably impressed by it. An arbor press’ basic function is simple enough: exert sufficient downward pressure on the die to either size the case neck or seat the bullet depending on which die is in use. It isn’t a mechanically challenging function. So why do we use an arbor press and what should be look for in one? Consistent operation, sensitive feel, quality of design and machining are the hallmarks of a good arbor press and this one from 21st Century comes away with good marks in all areas.

For my initial session with the press, I seated 72 bullets in .30-06 cases, another 70 in .308 cases and neck sized a handful of cases (just for evaluation since I prefer to full-length size). The design of the actuating arm, which angles slightly away from the press was very convenient, allowing me to operate it with less jostling of the press because my fingers weren’t bumping into the press head as they sometimes do with my previous press that has the handle parallel to the press head. That’s a nice touch and shows the press was designed by someone who has used these things.

The press uses a relatively light return spring which materially aids the feel of seating pressure. I prefer this to a heavier return spring which would reduce the feel that I really look for in an arbor press. For someone who uses very heavy neck tension this might not be a big concern, but because I usually use 0.001″ to 0.002″ neck tension, the ability to detect small levels of variance in seating pressure is important to me. High Quality Machining and Parts Finishing
Every part of the 21st Century press reflects careful thought and skilled machining. The knurled wheel for adjusting the height of the press head is a distinct improvement over the plastic hardware store knobs seen on many presses.

The aluminum press head itself is nicely anodized, the steel base well blued and the shaft nicely polished. Even the decapping base (photo at left) reflects careful design as well as precise machining. Overall, the press gives a look and feel of quality and is a welcome addition to my range reloading setup.

Editors’ Note: The designer of the 21st Century Arbor Press has decades of tool-making experience, and he has designed tools for many “big-name” companies. 21st Century stands behind the product with a lifetime warranty for the original purchaser. The Arbor Press is currently offered in two different versions, either with 3″ x 4″ baseplate for $85.99, or with 4″ x 5″ baseplate for $89.99.

This review originally appeared in RiflemansJournal.com in 2010. 21st Century Shooting Inc., a site advertiser, supplied an Arbor Press for testing and evaluation.
A Filipino company named JP Factory, located in the Southern city of Bacolod, has developed a prototype submachine gun chambered in 9mm. It uses Glock

Shared by Rob
For the overwhelming number of people who feel like they need to have a .45 the only two real choices are the M&P45 and the HK45 – Larry Vickers

Shared by Rob
Seemingly following in the footsteps of 3-gun nation, the Precision Rifle Series is a series of nation-wide precision rifle shooting competitions.

National firearms expert and trainer Massad Ayoob blogs about firearms, self-defense, and more.
Well, wouldn't you know it... they had digitally removed the shotgun and replaced it with a broom....?
Congress Service T-Shirt - There was a time when the people who served as our elected officials were the most brilliant and honorable members of our society. Service was exactly that a sacrifice of ...
Every Taurus Judge owner on Earth will want one…

The traditional Parang is the equivalent to the South American machete but has a heavier blade that is optimized for chopping and shaping the woodier jungle flora found in the knife’s birthplace of Southeast Asia.

Parangs are generally for bushcraft, but are also used as carpentry tools and occasionally weapons. Typically the blades are fashioned from leaf spring, are around 12″ (approx. 30 cm) long and are sharpened with a varying edge. The spine of the blade normally sweeps down to provide a sharp utility tip similar to a wharncliff. The center is sharpened with a steeper angle for chopping while the blade has a shallower bevel toward the handle for controlled cuts.

The handle found on the traditional Parang is usually wood (occasionally bone) and has a large outward sweeping pommel to prevent the handle from slipping forward while chopping in the humid jungle environment.

The Alfredo Doricchi designed Fox “Parang Buschcraft Jungle Knife” is more parang inspired than parang. This knife uses the Austrian made Bohler N690co steel found in most contemporary knives of Italian origin and is coated with a black finish very similar to Benchmade’s BK1 that Fox calls their “Idroglider” coating. At 6.7″ long (17cm) and .23″ (6mm) thick the Parang has a sizeable, weighty blade but still comes in at about 5″ shorter than the typical traditional variety. The Fox Parang has a steep upswept belly with a small drop at the point which begins and terminates within the swedge area. It does not have the typical wharncliff like tip but rather the opposite.

The spine of the parang has a good inch and a half of useable jimping followed by a gentle upward curve allowing for a controlled grip when choking up on the blade. The deep choil also lends itself well to this grip however the edge’s continuation up to the choil will make its use precarious without some modification.

The knife has a full tang and the handle is made from forprene. Forprene is a hard injection mouldable synthetic that feels rubbery to the touch and gives good grip. It is known to be impervious to liquids including oils and solvents, but can potentially crack in sub zero temperatures when exposed to excessive shock. Along the surface there is some scalloping for your fingers with moulded ridges. Overall the ergonomics are a bit awkward and the fairly straight pommel ignores the anti-slip feature of the original indigenous design. The front quillion is adequate to prevent forward slipping but won’t help much while chopping. Two holes drilled after the blade (one on the quillion and one near the spine) and a useful lanyard hole at the end of the handle allow for different lashing configurations.

The knife comes with a MOLLE compatible cordura sheath and a small survival kit that can be attached to the front of the sheath or left behind. Webbing and snapped straps allow it to be attached your belt (via snapped strap or velcro fold) or MOLLE compatible gear. The cordura is line with a thick plastic sheeting and the two halves are separated by a dense foam. Straps hold the knife in place by snapping over the front guard and around the centre of the handle. Unfortunately the strap for the front guard is sewn into the knife side of the sheath rather than from the back, causing it to get cut and abraded when the knife is drawn if you don’t hold it out of the way. The sheath also lacks a drainage hole which should be on all sheaths in my opinion, for easy cleaning/drainage. two loops on either side of the knife are designed to hold the supplied glow stick.

Overall the quality of the included items is very poor and could be excluded. The extra pouch for the kit and the tin are useful if the purchaser fills it with items of better quality.

All in, the Parang is a reasonable buy with some decent chopping power bundled with an adequate sheath. The handle ergonomics are a bit to be desired and classification of this knife as a parang is a bit confusing in that it lacks the typical shape, length, varied edge and handle of it’s original predecessor. It might more accurately be described as “inspired by Southeast Asian blades”.

DPx Gear Danger Tag with Breakaway Blade DPX gear is the brainchild of world traveler and über adventurer, Robert Young Pelton. The DPx Danger Cards are in stock and ready for immediate shipment. It’s a pretty simple yet innovative design by the folks at DPx Gear. The card/tag has perforated edges on the back that [...]

Shared by Rob
Blast from the past- Something good to listen to this time of year... 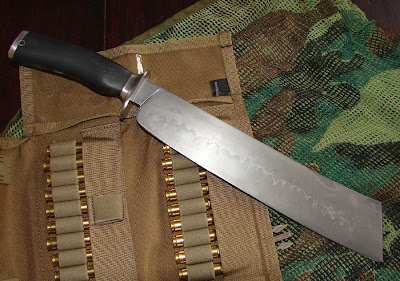 A few years ago I bought a mid-tech Razel and wrote a report on it. Every since then I have thought that a larger cleaver syle knife would be perfect for a camp knife. There are a few makers that offer these and my prolific bowie maker Matt Lamey is one of them. However this knife is not a Lamey creation. It was made by a maker heretofore unknown to me, one A.C. Richards. http://www.woodchuckforge.com/

I bought the knife secondhand from a forum member in "as new" condition. It only arrived today and I love it. The balance is decidedly to the front, which is as it ought to be for a cleaving knife. The forged W-2 blade is artfully marked with the maker's name and his JS (journeyman smith) stamp. Measuring 11.5 inches by 2.25 (at the widest point) the blade exhibits a billowing, almost choji style, hamon with a nice wrap around at the tip. The black micarta handle and stainless steel mounts are masterfully shaped and expertly fitted. It came with a very high quality black leather sheath. While it is not your typical Bowie, I think you will agree it is a formidible weapon.

We get this question every now and again. Yes, you can put a silencer on an AK . . . however, there are a couple of things you should know.

Most AK type rifles have M14x1LH threads for the flash hider. However, many times there is not a straight line on an AK and these flash hider threads may not be concentric to the bore. With a Flash Hider, this is not going to be as big an issue. Add a silencer to off center threads and you can get end cap or baffle strikes. For this reason we do not make a muzzle device for mounting silencers threaded M14x1LH.

We recommend if you want to add our Flash Hiders and/or Silencers, that you have your barrel threaded concentric to the bore in 1/2″x28tpi. We make a special 1/2×28 threaded Flash Hider with the bore through the flash hider EDMed out to accept a 7.62mm projectile. The 51T version is part number 100908 and the 18T version is part number 100909. These Flash Hiders also work well with 6.8Spc rifles threaded 1/2×28 or some lightweight FAL type rifles are also threaded 1/2×28.

The next thing about AK type rifles is they have an open gas system. They bleed gas straight off the barrel and allow supersonic gas to escape into the atmosphere. This supersonic gas causes additional noise. This means that a suppressed AK will not be as quiet as say a DI AR15 type rifle.

Scandal: New documents reveal the Department of Justice lied to Congress and show how U.S.